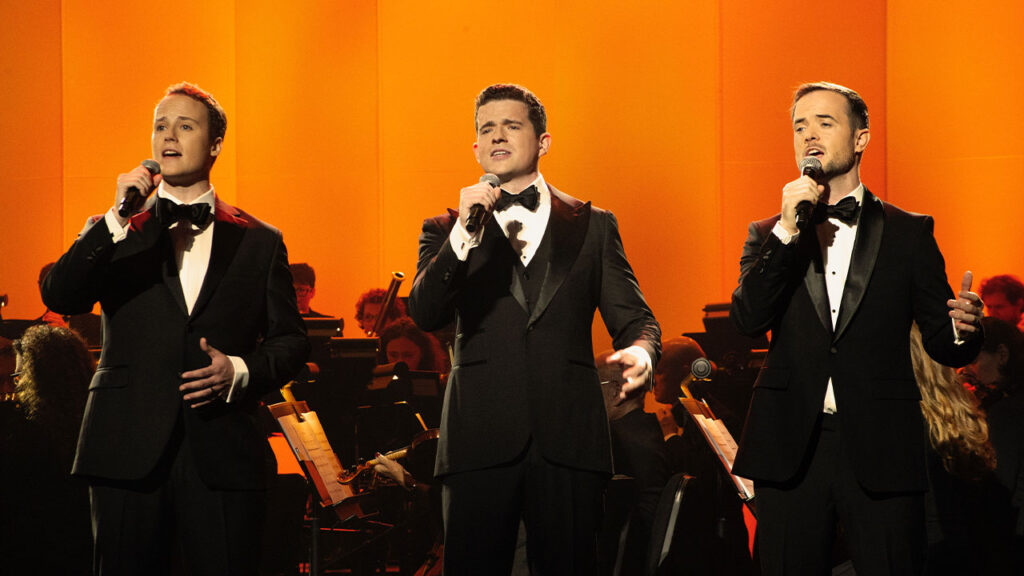 Emmett O’Hanlon, Conor Murphy and Ronan Scolard — three accomplished young singers with performance experience on stages around the world — make up the trio Trinity, presented on PBS in this production of their first concert.

Enjoy a great evening of Irish music as these three charming and extraordinary performers sing some of the most beloved songs from Ireland’s rich musical history. Backed up by the Gulf Coast Symphony in Fort Myers, Florida, one of America’s most Irish music-friendly cities, the concert is also remarkable for its fresh new arrangements by one of the trio’s talented tenors. Songs include: “Toora Loora,” “Red Is the Rose,” “Carrickfergus,” “Danny Boy,” “The Spanish Lady,” “Shenandoah,” “Raglan Road,” “The Rocky Road to Dublin,” “Grace,” “Isle of Hope,” “The Fields of Athenry” and “The Parting Glass.”

Emmett O’Hanlon was born in New York City to Irish parents. After graduation from The Juilliard School with a Master of Music degree, he set out on an amazing career as a classically trained baritone, opera performer and actor. His work as Principal Vocalist with Celtic Thunder took him to hundreds of cities in the U.S., Canada and Australia.

Conor Murphy has Irish opera in his blood — his great-grandmother, Mimi Devitt, was a famous Irish opera soprano before WWII, who earned the nickname “Mimi” for her well-received Dublin performances in La Bohème. Since earning a Bachelor in Music and Opera performance at the University of Toronto in 2016, Murphy has performed in opera, musical theater and solo performances across Canada, the U.S. and Europe.

Ronan Scolard is a multi-talented tenor and musician from Dublin. He studied music at Trinity College, The University of Dublin, and holds a Masters from the Dublin Institute of Technology. As a bonus to his warm tenor voice and considerable singing skill, Ronan is Trinity’s Musical Director and Arranger. His extensive experience, including choral and orchestra work and arranging for Riverdance and Celtic Woman, has made Ronan one of the most sought-after arrangers and music producers in Ireland.

Select this program when you support Arizona PBS and get tickets to see Trinity perform here in Arizona.