Airing Monday, Jan. 18 at 5:30 p.m. and simulcast on our social media and on this page, “MLK: Celebrating the Legacy” is a look at the past, present and continued future impact of Dr. King’s “I Have a Dream” speech on the Arizona community.

Community leaders across the Valley come together to reflect on the effects of the speech and how it has shaped the conversation of equality and diversity. Through this program, Arizona PBS seeks to to celebrate the legacy of Dr. King and encourage all people to actively work towards achieving the promise of freedom and justice for all.

“MLK: Celebrating the Legacy” was created in a partnership between Arizona PBS and the cities of Mesa, Tempe, Scottsdale, Chandler and Phoenix, the town of Gilbert and the East Valley Dr. Martin Luther King Jr. Celebration Committee. 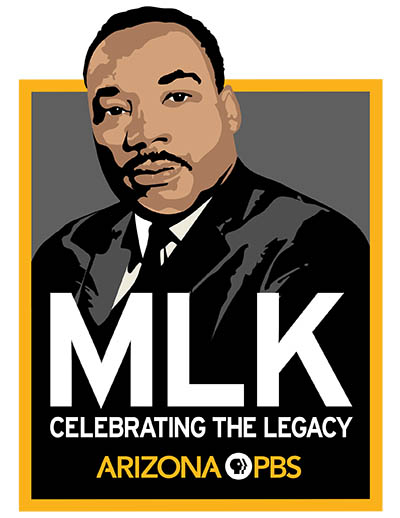 Look for these related programs on Arizona PBS:

New episodes Tuesday at 7 p.m. with encores at Wednesdays at 1:30 p.m.
Catch up online or on the PBS app.

For more than a decade, renowned Harvard scholar Henry Louis Gates, Jr. has helped to expand America’s sense of itself, stimulating a national conversation about identity with humor, wisdom, and compassion. Professor Gates has explored the ancestry of dozens of influential people from diverse backgrounds, taking millions of viewers deep into the past to reveal the connections that bind us all.

New episodes Tuesday at 8 p.m.
Catch up online or on the PBS app.

Monday, Jan. 18 at 11 p.m.
To honor the life and legacy of the civil rights icon, music director Franz Welser-Most and the Cleveland Orchestra perform classical selections by Beethoven, Mendelssohn and Verdi as well as traditional hymns and spirituals, including “Down by the Riverside,” “Precious Lord,” and “Lift Every Voice and Sing.” Actor James Pickens, Jr. hosts.

Wednesday, Jan. 27 at 8 p.m.
The grandson of Alabama slaves, Percy Julian met with every possible barrier in a deeply segregated America. He was a man of genius, devotion, and determination. As a black man he was also an outsider, fighting to make a place for himself in a profession and country divided by bigotry—a man who would eventually find freedom in the laboratory. By the time of his death, Julian had risen to the highest levels of scientific and personal achievement, overcoming countless obstacles to become a world-class scientist, a self-made millionaire, and a civil-rights pioneer. Explore more.

Coming up for Black History Month in February:

“The Black Church: This Is Our Story, This Is Our Song” will explore the 400-year-old story of the black church in America, the changing nature of worship spaces, and the men and women who shepherded them from the pulpit, the choir loft, and church pews.

John Lewis: Get in the Way

Follow the journey of civil rights hero, congressman and human rights champion John Lewis. At the Selma March, Lewis came face-to-face with club-wielding troopers and exemplified non-violence. Now 76, he is considered the conscience of Congress.

Explore the complicated history of the American South and its music through the life of country star Charley Pride. Raised in segregated Mississippi, his journey shows the ways that artistic expression can triumph over prejudice and injustice.

American Experience “Goin’ Back to T-Town”

Hear the extraordinary history of Greenwood, a successful Black community in segregated Tulsa. In a nostalgic celebration of old-fashioned neighborhood life, Black residents of “T-Town” relive their community’s remarkable rise and ultimate decline.

In Their Own Words “Muhammad Ali”

Follow Muhammad Ali’s path from a gym in Louisville to boxing successes, conversion to Islam, opposition to the draft, exile from the ring, comeback fights, Parkinson’s disease and his inspirational re-emergence at the Atlanta Olympics.

Explore the fascinating life of celebrated singer Marian Anderson. In 1939, after being barred from performing at Constitution Hall because she was Black, she triumphed at the Lincoln Memorial in what became a landmark moment in American history.

“Marching Forward” shares the story of two high school band directors – one black, one white – whose love of music and dedication to their students inspired an atypical collaboration in the segregated south. Their friendship and professional cooperation resulted in the experience of a lifetime for two Orlando-area bands at the 1964 New York World’s Fair.

This hour-long documentary, hosted by Dr. Henry Louis Gates, Jr., chronicles the only juried American book prize focusing on works that address racism and diversity. The program serves to amplify diverse voices and foster dialogue about inclusivity that transcends the digital divide. During the current movement for racial equality, the necessity and relevance of these writings is as great as ever.

Driving While Black: Race, Space and Mobility in America

Discover how the advent of the automobile brought new freedoms and new perils for African Americans on the road in this deep look into the dynamics of race, space and mobility in America over time.

Monday, Feb. 22 at 9 p.m.
Premiering in 1968, SOUL! was the first nationally broadcast all-Black variety show on public television, merging artists from the margins with post-Civil Rights Black radical thought. Mr. SOUL! delves into this critical moment in television history, as well as the man who guided it, highlighting a turning point in representation whose impact continues to resonate to this day.

One Night in March

Discover the story of a historic college basketball game that captured the national imagination and helped redefine a sport, just as the Civil Rights movement began gaining momentum throughout the South.

An Evening with Berry Gordy

In this one-on-one interview with the founder of Motown Records, discover how Gordy grew the company into the most successful African American-owned enterprise in the United States.