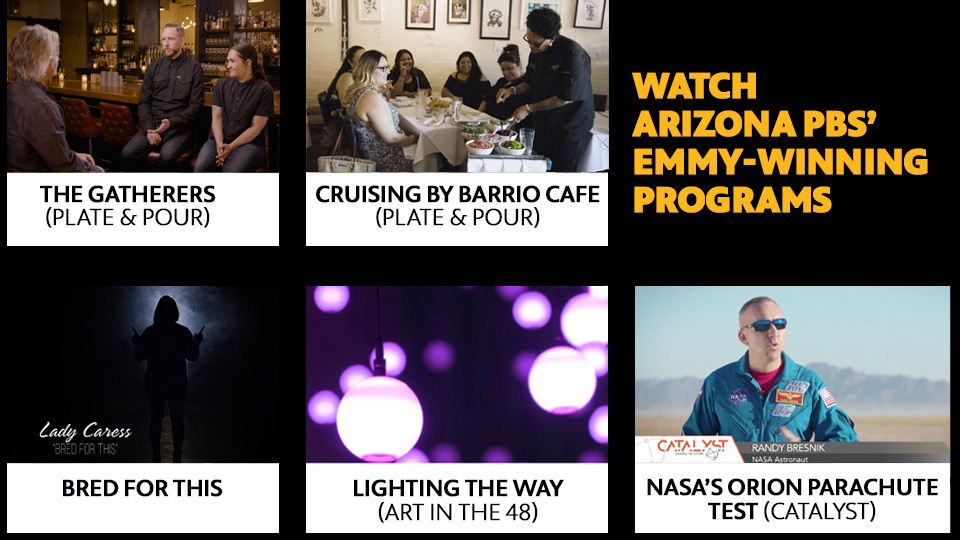 Arizona PBS tied with ABC 15, who also won eight Emmys Saturday. KSL5 in Utah won the most Emmys for the night, at 15.

“Art in the 48,” which premiered last fall, won its first Emmy for the program “Lighting the Way.” “Plate & Pour” won two Emmys in its second season, including an Emmy for the show’s host, Mark Tarbell. In addition, “Catalyst” also took home an Emmy, and the Central Sound audio production team won two Emmys for their recordings of “Only in Sleep” by Ēriks Ešenvalds and “Harp of Nerves” by Hilary Purrington.

“Bred for This,” one of a series of interstitials on Arizona PBS that celebrated stories and experiences within the African American community for Black History Month, also snagged an Emmy during the virtual awards.

The piece was written and performed by Caress Russell, aka Lady Caress. Ebonye Delaney, assistant production manager at Arizona PBS and a producer for the interstitial, said “Bred for This” was a “labor of love,” and that the spoken word piece was a powerful medium to convey African American struggles.

Delaney also said that getting nominated was “the greatest feeling in the world,” but at the end of the day, the Emmy for “Bred for This” and the seven others that the station took home, mean more than just peer acknowledgement.

“It means that we’re on the right track. Arizona PBS is committed to telling those stories that reflect our entire community in a variety of different ways. This means so much to Arizona PBS. We need to keep going in that direction and continue to tell stories that matter,” Delaney said.

In the college contest, Cronkite students took home seven Student Production Awards in five categories. Students’ work covered topics such as the coronavirus pandemic, youth suicide in Arizona and sports, and were honored for anchoring, editing and storytelling.

Heather Dunn, the content director for Cronkite News, said students were honored for telling stories through different mediums, much like Arizona PBS. And receiving the different awards, she said, shows that students were recognized for their focused and strong reporting.

“It’s a big honor to be recognized. We compete against other schools within the Rocky Mountain region and it’s always wonderful to see all the different work that colleges from our region are producing. And it’s especially nice that our students took home so many honors this year,” Dunn said.

The Rocky Mountain Southwest Chapter is one of 19 chapters of NATAS, and represents Arizona, New Mexico, Utah and El Centro, California. NATAS honors the advancements, creativity and achievements in the arts and sciences of the television industry.

Arizona PBS has won 98 Emmys since 1981, while the Cronkite School has now won 64 Student Production Awards since 2009.

We Are Family: Songs of Hope and Unity

Join Maestro Luke Frazier and a star-studded cast for an exciting evening of songs that bring us together.