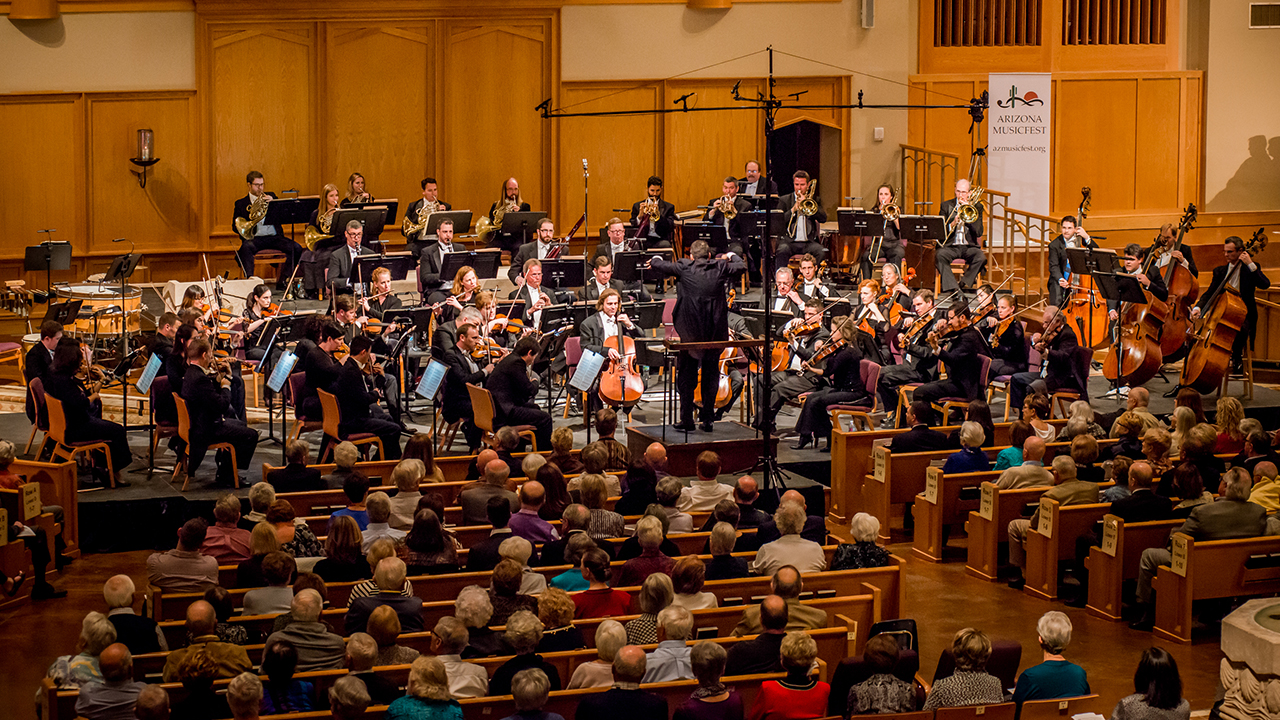 The Arizona Musicfest Festival Orchestra, under the direction of Robert Moody.

For one week only (February 18-25), the finest orchestral musicians of America come to Arizona to perform as the Arizona Musicfest Festival Orchestra. Under the direction of Maestro Robert Moody, this year’s Orchestra features premiere musicians from the New York Philharmonic, Chicago Symphony, Cleveland Orchestra, Philadelphia Orchestra, the National Symphony Orchestra, the Metropolitan Opera Orchestra and many other distinguished ensembles.

On Feb. 20 at 7:30 p.m., the festival orchestra will cover some of the most notable works in the classical repertoire including Richard Strauss’ “Don Juan” and Johannes Brahms’ “Symphony No. 3.” The performance also includes a double cello concerto featuring cellists Brant Taylor of the Chicago Symphony and Brian Thornton of the Cleveland Orchestra.

In addition to the performance, attendees have the opportunity to mingle with musicians, music aficionados and classical radio personalities at the KBACH/KJZZ remote truck, Soundbite. Soundbite is a new, 40-foot truck that doubles as a studio and a kitchen.

Classical Arizona PBS and KBACH will be on-site to capture and broadcast the live performance. Concertgoers are invited and encouraged to come see Soundbite before and after the performance as well as be part of the live audience.

For those unable to attend, the entire evening will be broadcast live. Sterling Beeaff will host the live broadcast, which can be heard on Classical Arizona PBS (DTV 8.5 and mobile app) and KBAQ (89.5 FM, “KBACH”).

Arizona Musicfest is a local nonprofit whose mission is to educate and inspire the public through music, encourage youth to pursue an interest in the arts and to create a community of music lovers. The festival has been named “The Best Classical Music Festival” by The Arizona Republic and is regularly named one of Phoenix Magazine’s top 10 concerts.

The Festival Orchestra attracts top musicians from the New York Philharmonic, Chicago Symphony, the San Francisco Symphony and many others to perform five concerts in nine days as a part of Arizona Musicfest. This year’s orchestra is comprised of more than 100 musicians.

Tickets for the Feb. 20 performance of “The Festival Orchestra: Strauss and Brahms” are available through the Arizona Musicfest website.