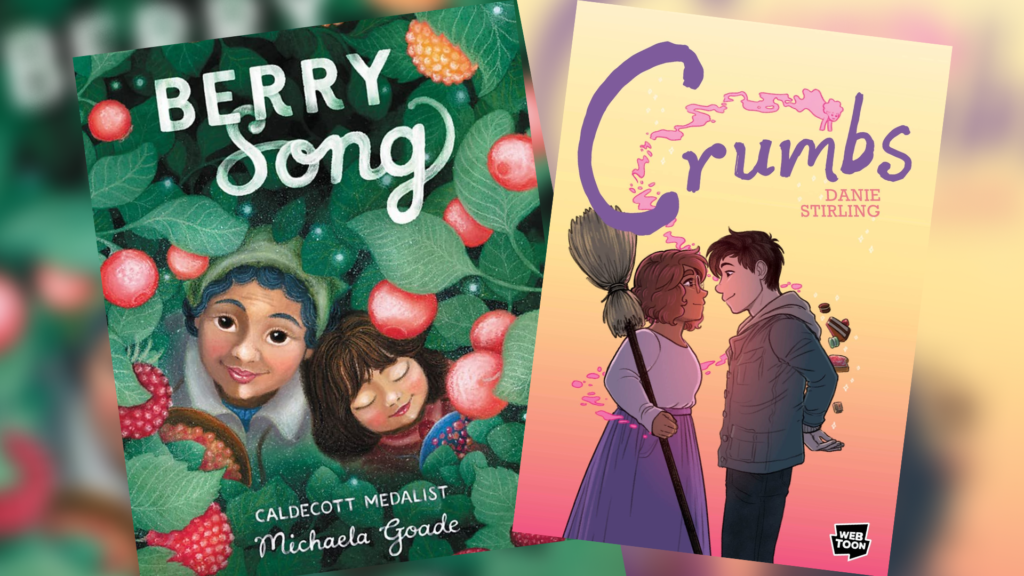 Summer means it’s time for books, and Changing Hands has the scoop on some of the best summer reading titles. From picture books to teen reading to adult books, there’s something for everyone. We spoke to Cindy Dach of Changing Hands bookstore about some must-reads this summer.

On an island at the edge of the sea, a girl and her grandmother gather gifts from the earth. Salmon from the stream, herring eggs from the ocean, and in the forest, a world of many different kinds of berries.

Through the seasons, they forge a deeper kinship with both the earth and the generations that came before, joining in the song that connects us all.

Dach told us about Crumbs, by author Danie Starling. Crumbs is an extraordinary graphic novel, a coming-of-age story of love and life. It focuses on Ray, a quiet young woman with special powers. When Ray meets Laurie, a barista who hopes to be a professional musician, she gets a taste of love for the first time. But even with a spark of magic, romance is not simple. Both Ray and Laurie are pursuing their own dreams and even when Ray starts to see the future, she can’t predict her fate with Laurie. This book is based on the webcomic from WEBTOON.

Answers in the Pages is a timely novel about speaking up and coming out, as parents lobby to ban a beloved book from the school curriculum . The book is written by New York Times-bestselling author David Levithan.

When Donovan left his copy of The Adventurers on the kitchen counter, he didn’t think his mom would read it, much less have a problem with it. But soon the entire town is concerned about whether the book’s main characters are gay. Donovan’s mom also tries to get the book removed from the school curriculum. Meantime, Donovan is caught in the middle.

Donovan doesn’t really know if the two boys fall in love at the end or not—but he does know this: even if they do, it shouldn’t matter. The book should not be banned from school. Weaving three connected storylines storylines, David Levithan delivers a story about being brave, and standing up for what’s right.

The Man Who Could Move Clouds is a memoir from Ingrid Rojas Contreras. Raised amid the political violence of 1980s and ’90s Colombia, in a house bustling with her mother’s fortune-telling clients, the author was a hard child to surprise. Her maternal grandfather, Nono, was a renowned healer gifted with what the family called “the secrets”- the power to talk to the dead, tell the future, treat the sick, and move the clouds. And as the first woman to inherit “the secrets,” Rojas Contreras’ mother was just as powerful.

This legacy had always felt like it belonged to her mother and grandfather, until, in her twenties, Rojas Contreras suffered a head injury that left her with amnesia. As she regained partial memory, her family was told her that this had happened before. Decades ago, Mami took fall that left her with amnesia, too. And when she recovered, she had gained access to “the secrets.”

In 2012, spurred by a shared dream among Mami and her sisters, and her own powerful urge to relearn her family history in the aftermath of her memory loss, Rojas Contreras joins her mother on a journey to Colombia to disinter Nono’s remains. With Mami as her guide, Rojas Contreras traces her lineage back to her Indigenous and Spanish roots, uncovering the violent and rigid colonial narrative that would eventually break her mestizo family into two camps: those who believe “the secrets” are a gift, and those who are convinced they are a curse.

We Measure the Earth With our Bodies is written by Tsering Yangzom Lama, and it’s a story told through the lives of four people over fifty years.

In the wake of China’s invasion of Tibet in the 1950s, Lhamo and her younger sister, Tenkyi, arrive at a refugee camp in Nepal. They survived the dangerous journey across the Himalayas, but their parents did not. Lhamo is haunted by the loss of her homeland and her mother. But ope arrives in the form of a young man named Samphel and his uncle. They bring the ancient statue of the Nameless Saint, a relic known to vanish and reappear in times of need.

Decades later, the sisters are separated. Tenkyi is living with Lhamo’s daughter, Dolma, in Toronto. While Tenkyi works as a cleaner and struggles with traumatic memories, Dolma vies for a place as a scholar of Tibetan Studies. But when Dolma comes across the Nameless Saint in a collector’s vault, she must decide what she is willing to do for her community. This is a story about lengths we’ll go to remain connected to our families and ancestral lands. Told through the lives of four people over fifty years, this novel provides a nuanced, moving portrait of the little-known world of Tibetan exiles.

The link between cancer and suppressed insulin